The following is an excerpt from 'Patterns,' a story by Mike Lera, published by Bete Noire Magazine (under former pen name Michael Lizarraga).

Synopsis:Mr. Louis Arroyo, 29. Occupation: Security Officer. A recovering junkie who fosters a most unusual addiction, yet suppresses it with the most unusual allies. A 'higher power,' if you will. Not the conventional constellations or mystical mists, but faces and figures he finds in the contours and constructs of plastered walls, floor tiles, ceilings, table stains or cemented sidewalks. Any place he could pattern a mouth with a pair of eyes, or a torso with a set of limbs. A wince or a wink or an occasional sound from one of these silhouetted characters; an obsession since childhood he’s always referred to as The Line People. Pals and protectors who have cradled, calmed, cared and, at times, corrected Louis throughout his life...

In a moment, Louis will find out just how real his 'higher power,' The Line People, actually are...

He was aroused moments later by

as though searching for a radio

We’re right here beside you.

The voice could have been a man or a

He staggered out of bed, as though 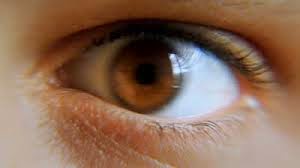 light on, and on a blue plaster wall just

before his face stood a contour image

more apparent than any other 'Line

Person' Louis had ever seen. Almost as

if looking at a blue abstract painting of

“Einstein” hair waving behind it.

sagging skin along the face, as though a

melting wax figure. The mouth was a

teeth. Its eyes stood out the most. Light

hardboiled eggs with little yokes as

pupils, staring at Louis as if someone 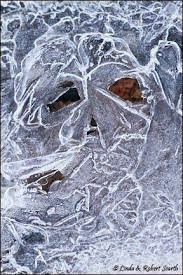 The blue face suddenly jutted toward

expanding behind its head in a

Simulating an elastic band, or someone

The plastered face came inches from

Louis’s, its round eyes gazing into his

with its trance-like stare. Close up, the

character reminded Louis of The

Elephant Man, or a zombie shrouded in a

bottom of its square mouth lowered, and

with the sound of a distant underwater

echo, in a mixture of taunt and

pounded through Louis’s head as if

pumps had been shoved in his ears and

were trying to suck him dry. Aghast, he

couldn’t move other than to tremble. 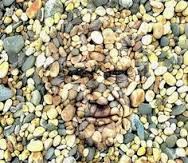 We’re right here beside you.

For complete version of Patterns, you may purchase issue #12 of Bete Noire magazine at "Goodreads" :